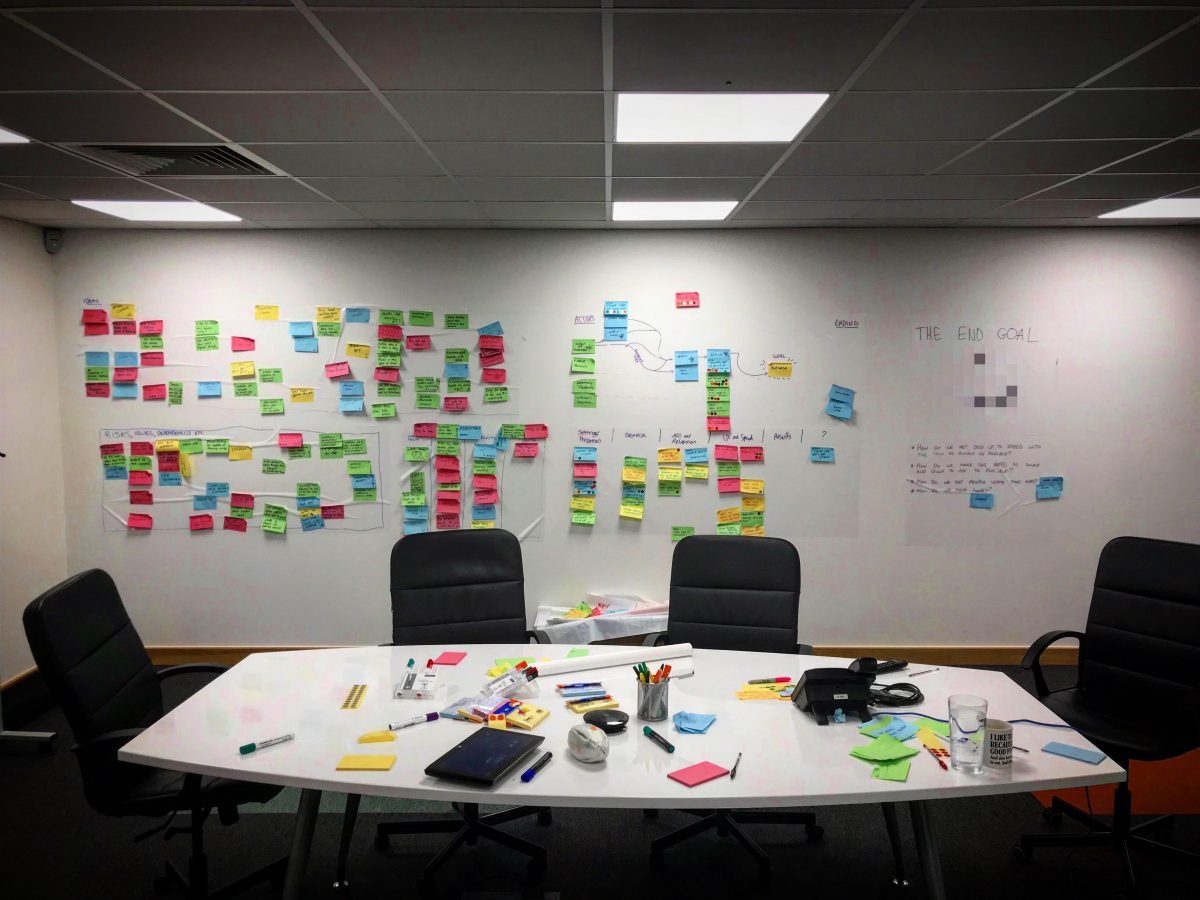 What’s the process of starting a new development project in your organisation? Commonly, someone has an idea and creates a business case. The business case contains lots of assumptions, some loosely related statistics, lots of statements about how this project is going to do amazing things for the company, and a price. The business case gets passed from desk to desk, until someone signs-off on it and things get underway. There’s rarely more than two options – accept (at full project cost) or decline.

What if some of the assumptions were wrong? What if customers didn’t react the way imagined? Are the team going down the wrong path with the way the product was designed?

We’ve been using a process pioneered by Jake Knapp at Google Ventures which helps solve big problems and test new ideas in just five days. It may not sound like a team can get very much done in five days at all, but I was surprised that the process really works. That may be down to how the process is laid out – it gives day by day and hour by hour instructions on exactly where the team should be focusing their efforts. This means that activities are timeboxed and so the team don’t spend their time going into too much detail on how a concept may function.

The idea is that a team can explore a problem and come up with one or more wireframes, clickable prototypes or even the very beginnings of a website or application that can be tested with five target customers on the final day to get feedback on what works, what doesn’t work and what improvements can be made when the project goes into full development. It may be that the idea doesn’t work at all, and that’s good. There’s been only spent five days effort in finding that out and that’s valuable information. It might be that with multiple designs, customers pick the alternative that everyone believed wouldn’t work (as was the case with the Blue Bottle Coffee Sprint explained in the book. Domain experts sometimes take for granted how others think about buying their product.)

There’s a great series of YouTube videos by Jake and GV Design Partner John Zeratsky giving both an overview of the entire process, along with a day by day introduction on what will be happening and what the day’s goals are. This was a great way to introduce the team to the process as a whole, but also a nice way to start each day.

Monday we explored the problem, identified risks, created a product map and interviewed domain experts about the problem and the map we’d created. The team took notes during the interview and created “How might we?…” questions. We had homework that evening to list out some UI ideas used by other sites.

Tuesday we used “lightning demo” presentations to present some of those UI ideas to the rest of the team. We used “crazy-8s” (a piece of paper folded into eight sections) to individually sketch prototype ideas, then individually sketching out solutions to the problem. These were very basic sketches and so there was no need to be an artist! We did deviate from the process a little here, meaning that the team reviewed these sketches in a showcase at the end of Tuesday (placing sticky dots on the elements they thought were worth taking forward).

Wednesday the decider (the person with the role of making the final decision) made the decision on what was going to be taken forward to prototype. This process is structured so that the heatmaps created by the team (placing sticky dots) help the decider make the decision. We started prototyping on Wednesday afternoon.

Friday we performed the interviews, with five potential customers taken through the interview written by the writer. It was fantastic to see the feedback from the interviewees and how they reacted to the different parts of the prototype. Both good and bad feedback was received for various elements, but absolutely all of it was useful to see what could be taken forward into a full build and what could be replaced. Using Skype for Business, we streamed the interview to another room where the developers were taking notes (on coloured sticky notes – red for bad, green for good and yellow for neutral). Once the interviews were complete, we could easily see where common themes existed and even the priorities that could be taken into a full build.

So what did we learn?

Was it worth it?

Absolutely! We invested five days. Five days! How much time is wasted in your organisation building parts of software projects only to find out that the concept doesn’t work when real customers come on board? How many customers have you lost because the user journey has fundamental flaws that could have been easily weeded out using this process?

Watch the video below to get an overview from Jake on the Sprint:

The Digital Transformation of the Public Sector

In working to build a modern and connected society, there are a wide range of options and priorities, taking in everything from making services more accessible to unlocking the power of data.

How is this translating into tangible impact and how will the digital transformation of the public sector progress in the years ahead?

It’s All In The Numbers - Why Has Data Become So Valuable For Every Business?

It’s now over 15 years since mathematician Clive Humby coined the phrase “data is the new oil”, and in the process, sparked a debate that continues to this day about where its value truly lies.

Gearing for Growth - Why Businesses Must Reach for the Sky

As economies inch towards full post-pandemic recovery, businesses everywhere are looking to focus on growth. The biggest question, of course, is how?

This book takes a pragmatic and hype–free approach to explaining artificial intelligence and how it can be utilised by businesses today.

Book Review - The Price of Tomorrow by Jeff Booth

Even though this book was written pre covid it gives excellent insight to why our economy was badly damaged by a pandemic.

This book is a great book for understanding the world of intelligent automation, and has some excellent use cases at the end, to get the juices flowing with ideas on how you can implement it within your organisation.